Dishwasher salt is different from table salt in a few ways, particularly in its size and consistency. Table salt granules are usually finer and much smaller in size compared to dishwasher salt. This can cause the drains to get clogged in a dishwasher. The bigger granules of dishwasher salt on the other hand doesn’t interrupt the regular cleaning functions of the dishwasher and are rarely likely to create any clogs. 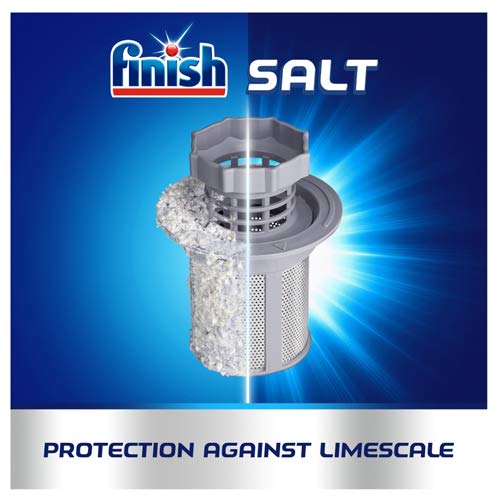 Are your dishes not coming out as clean as they used to from the dishwasher? Do the plates now contain annoying stains and streaks while the glasses come out cloudy? Then that most likely happened due to low levels of dishwasher salt in the dishwasher.

Wondering what’s salt got to do with your dishwasher? Well, dishwasher salt is basically coarse, grainy crystalline sodium chloride. Ideally, it prevents hard water from staining the dishes.

If the water used for washing the dishes isn’t soft enough, it will definitely leave the dishes streaky. This is where the dishwasher salt comes to the rescue. It expels the trapped calcium and magnesium ions of the hard water by regenerating the ion exchange resins.

They are usually much larger than table salt and take longer to dissolve. Since dishwasher salt grains are coarse, there’s rarely any chance for the softener to clog.

If your dishwasher runs out of salt and at the same time the water in your water supply is fairly hard, deposits of limescale will easily develop on all the glassware and dishes. This happens since the hard water makes it difficult to dissolve the detergent.

So, it’s a very important component for dishwashers if you want to avoid having unwanted white residues on your dishes.

You may think that dishwater salt is a necessity only for areas with hard water. But in reality, even if you’re living in a place with soft water, dishwasher salt is still an essential. However, if the water is rather soft, it will take a longer time for the salt to be refilled.

The salt plays a vital role to protect your machine from the formation of limescale and helps the process to soften the water inside the machine. Using rinse aid alongside keeps the dishes spot-free.

These days, conveniently most machines have an indicator to let you know when it’s time to refill your salt dispenser.

Using dishwasher salt is quite a fuss-free job, but, they should only be used in dishwashers that have a built-in specific compartment for them. Units that come with a water softening system usually come with a compartment dedicated for the salt. It is mostly located near the bottom basket.

All you need to do is pour dishwasher salt into the compartment, fill it till the waterline, latch or close it shut and there, you’re ready to use it.

But hang on. One mistake you must not make is pour detergent into the compartment for salt. Your dishwasher’s water softening system could get ruined completely.

Commonly, it is believed that dishwasher salt fights off the hard water stains directly. Actually, what it does is reset the water softener built inside the dishwasher. Using soft water gives you cleaner dishes and alongside, it protects the jet and heating element from becoming damaged.

In UK, a number of dishwashers have specific water softener baskets that are filled with tiny balls of resin. These resin balls capture the magnesium and calcium ions found in hard water that would otherwise form the unwanted streaks and stains on the dishes after they have been cleaned.

Interestingly, when dishwasher salt is used, negative atomic charge in the resin balls and positive atomic charge in the dishwasher salt attract each other through a method called ion exchange. This process resets the resin balls due to which they become really effective in absorbing the stain-causing magnesium and calcium ions.

Dishwasher salt differs from table salt in many respects, especially in its size and consistency. Table salt granules are usually thinner and much smaller than dishwashing salt. This can cause dishwasher drains to become clogged. Larger granules of dishwasher salt, on the other hand, do not disrupt the regular cleaning functions of the dishwasher and rarely cause clogging.

Another key difference between the two is in their chemical structure. Table salt usually contains magnesium, which is an anti-caking compound. It tends to encourage production of hard water stains on the dishes. This occurs as the magnesium affects the mechanical components of the dishwasher.

What Can I Use Instead Of Dishwasher Salt?

Kosher salt is a popularly used substitute for dishwasher salt. As for the rinse, white vinegar is sometimes preferred as a substitute.  You can also use a mixture of two teaspoons of half borax and half baking soda.

Vinegar and table salt is also used as a replacement but it is highly recommended that you only use dishwasher salt for dishwashers as their larger granules and absence of anti-caking agents are positive for your dishwasher’s health unlike the rest of the substitutes.

What Happens If You Don’t Put Salt In Dishwasher?

The water used in dishwashers must be soft so there are no white stains or water marks remaining on the dishes after they have been washed. But, it is not always likely that the water from your tap will be soft. Some areas have a supply of hard water and that is where dishwasher salt plays a key role for households using dishwashers.

Sodium inside the dishwasher salt mixes with the resin balls and absorbs the hardness of the water through a method of swapping positive and negative ions. As a result of this, your dishes will some out stain free and spotless. It is also effective to keep the jet and heating element damage free.

How Often Should You Put Salt In A Dishwasher?

But, never do the mistake of putting dishwasher salt into the detergent or rinse aid pocket. It could crack your dishes and glassware!

Do All Bosch Dishwashers Need Salt?

Bosch dishwashers come in with a special water softening system, the details to which can be found on their instructions manual. For the system to work correctly, it requires the dishwasher to use dishwasher salt. For the very first time you use the dishwasher, you must run water through the salt dispenser. Then onwards, that won’t be required.

It hasn’t been widely tried and tested. Although dishwasher is a very pure form of sodium chloride, due to technical causes, there might be the presence of certain impurities that could be toxic or fatal to human health even in the littlest of doses. Since it hasn’t been tested or certified to be safe for consumption, it’s best to stick to table salt than something that could potentially be dangerous to your health.

I’m Rabbi Steven Bayar, a professional chef whose love for food is unrivaled (or at least I like to think so). One of the things I love about my profession is helping home cooks get the highest standards possible in their own kitchens. To do that, I've been contributing to this website, bringing my views on some of the top kitchen and dining equipment you can find. I want to make life easier in my kitchen, and I hope to make your life easier by sharing my experience of products that help you become a top-class cook.